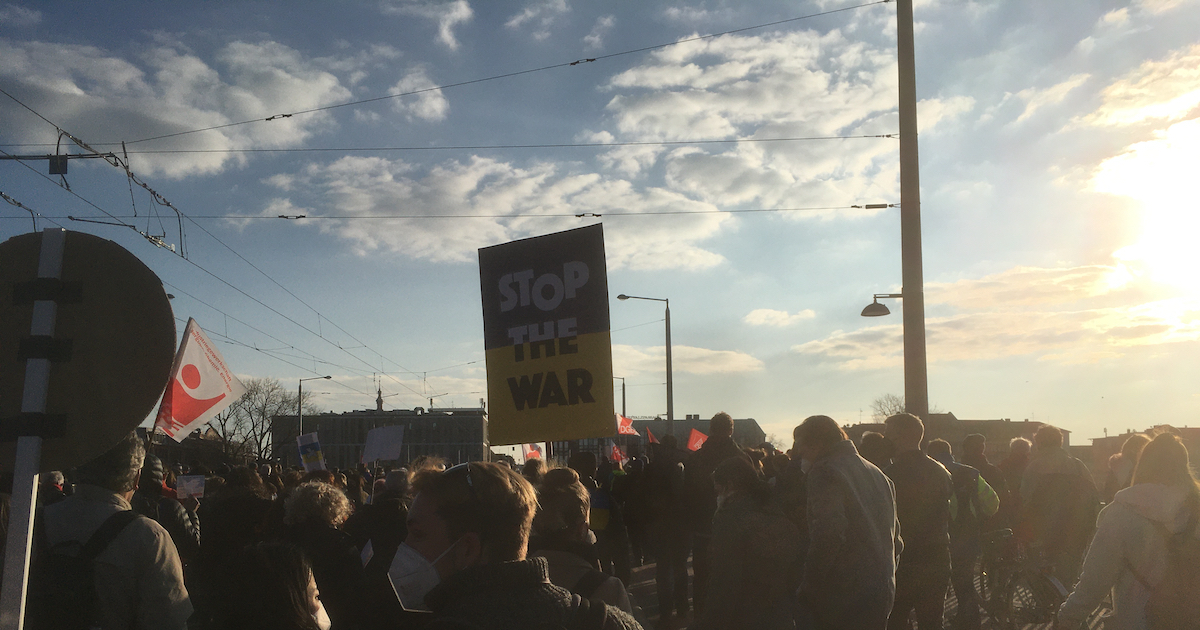 The Russian war on Ukraine and Europe: Is the EU ready for the challenge?

The military attack on Ukraine seems to be stalled around Kyiv and the northern frontlines. Yet the hopes of the defenders may turn out to be premature, especially on the political battlefields and if one looks beyond Ukraine. The EU and its central economic power Germany have not yet fully understood that this conflict is not limited to the battlefields of Ukraine, and that they have been attacked as well. The lack of awareness became most obvious after the speech by Ukrainian president Volodymyr Zelenskiy to the German parliament, which rejected a debate, referring to its set agenda for the day.

The German government is still not up to the current challenges. Chancellor Olaf Scholz gave an assertive speech on the third day of the war against Ukraine declaring a turnaround in German foreign policy that included stopping the North Stream 2 pipeline (which should never have been built anyway after the first Russian attack on Ukraine in 2014), full participation in economic sanctions, and supplying weapons to the Ukrainian army. But since then the debate on the war has stalled, and the delivery of weapons is slow, maybe too slow to stem the Russian military offensive in the Donbas. The finance minister and chairman of the Liberal Party Christian Lindner has pushed through a hefty tax discount on gas, as if the state could solve the problems of the energy markets, the economics minister and chairman of the Green Party Robert Habeck has warned a long time against the impact of stiffer sanctions and an embargo against Russian gas and oil, while the chancellor is generally keeping a low profile and giving reassuring statements assuaging German angst that NATO might be drawn into the war.

Meanwhile, the payments for Russian energy have risen almost threefold compared to February 2021 and keep on oiling Putin’s war machinery with 700 million US dollars a day. Putin has even taken the initiative against Western sanctions by demanding one month after the start of the war that Russian oil and gas must be paid for in rubles. This would resurrect the full convertibility of the Russian currency and partially offset the Russian Federation’s exclusion from the international payment system Swift. The hesitant German reactions to this move reveal that the economic superpower has not yet understood that by attacking Ukraine Putin has also declared war on the EU and NATO. Moreover, Putin can test by this shrewd move how susceptible to blackmail the EU and particular Germany are. The Russian president has already found an ally in the EU. The Hungarian prime minister Viktor Orbán announced after his election victory that he would pay in rubles.

Hence it was the right decision by the Polish, Czech, and Slovenian prime ministers not to bother asking Orbán, but also not a prominent member of the German government to accompany them on their train ride to Kyiv, although that would have greatly increased the political impact of that courageous journey. Germany is no longer admired as an anchor of stability in East Central Europe, but seen as a saturated, self-centered, and even corrupt weakling. This is how Jean Paul Sarte portrayed French society and politics in his novel Le sursis (there is a good English translation titled The Reprieve) on the eve of the fateful Munich Agreement in 1938, when the western powers of that time betrayed Czechoslovakia.

How united is the West?

The West looks more united at the moment, and it is certainly stronger than the group of anti-fascist countries on the eve of World War II. But it remains to be seen how strong that unity will be if Putin makes the delivery of Russian energy next fall and winter conditional on giving up overt political and covert military support for Ukraine. If he stops the supply of gas and oil, it will have a different impact on the European home fronts than if the EU governments openly communicate that Putin has declared a war on us as well and that strict counter measures are needed not only in support of Ukraine, but for the sake of the EU. Of course, western politicians have warned that the sanctions against Russia will come at a price, but that announcement was geared towards the future. Now the price might indeed have to be paid, and that will trigger conflicts between and within countries. Regarding the sanctions it is also important to switch the perspective. While it makes sense to keep NATO out of Ukraine in order to prevent a Third World War, and therefore to refrain from declaring a no-fly zone as in Bosnia in 1993 or a humanitarian mission by the alliance, in Russian eyes the Western sanctions are but a different form of warfare.

The war has now anyhow moved closer to the EU because of the arrival of more than 5 million refugees. Taking into account Russian military action in Syria and, the total destruction of cities such as Mariupol, or the course of the war in Bosnia in 1992/93, where half of the population was displaced, the EU may expect up to 10 million refugees. Displacing masses of people and thus paralyzing the enemy is, like economic sanctions, another method of modern warfare which worked well when Hitler invaded France in the spring of 1940.

At the moment, Poland has received the most refugees from Ukraine. The motives for the Polish open-door policy are historically rooted in the motto “za wolność naszą i waszą” (for our and your freedom) that was developed in 1830/31 to universalize the struggle against Russia. It did help the Polish insurgents to win European public opinion, like Zelenskiy does today, but it did not prevent the military collapse after around half a year of fighting. The donations in the German Confederation helped the Poles reach their French exile, but the money came too late to buy weapons and deliver them to the insurgents. The PiS government, just like Hungary, is also certainly keeping its borders open because it would be impossible to close them, because it helps repair the political damage done by their refusal to offer any help during the “refugee crisis” in 2015/16 (as I argued at the time in my history of refugees in modern Europe, the term was an exaggeration), and because it even confirms the right-wing populist stance that every country can decide for itself which refugees and other migrants it accepts or rejects. (The main argument for that has been a claim to preserve national sovereignty; it remains to be seen how active the sovranisti in Italy, Austria and elsewhere will become if the EU faces a severe energy crisis in the fall or winter.) It is all the more urgent to concentrate decisions about the energy policies on the European level, and not to repeat the fatal mistake with North Stream 2.

The solidarity with the refugees from Ukraine so far has been astounding. But is it not a compensation for the lack of clear political support for Ukraine on other levels? Helping people in need is a great asset, yet the public support for refugees is likely to wane the more Ukrainians come and need to be housed, fed, and given access to the labor market. Moreover, humanitarian support and politics cannot replace grave economic and political decisions that need to be made on our European home fronts. One should principally distinguish between patriarchal solidarity (such as donating worn clothes, furniture, and small amounts of money to charities), for which the recipients have to remain grateful and therefore in an inferior status, and active solidarity that is ready to make sacrifices and pursue clear political goals in cooperation with the recipients. This kind of solidarity may hurt for some months and maybe years, but if it is not provided, the long-term losses to our freedom and welfare are likely to be higher.

The minimum goal of our times needs to be that Ukraine cannot not lose this war, because otherwise democracy will have lost against dictatorship. The EU too cannot lose this war because there is still Putin’s demand that NATO should retreat from Eastern Europe. At the moment, it looks unlikely that the Russian army can conquer Ukraine and install a puppet government, but Russia might grab large territories, and lay waste to the rest of the country. Who will be next once Putin has reached his goals in Ukraine at least partially? The Baltic countries with their Russian minorities, which belong to Putin´s “russkij mir”? Or Poland, which a Russian leader who legitimizes his policy with a blend of older imperial and Stalinist tropes, certainly despises as much as Ukraine? Putin has shown several times his ability for surprise attacks and military action. Even if his Blitzkrieg against Ukraine has failed, one never knows what his next goals and means of reaching them might be.

So far, no European leader has attempted to give a postmodern variant of Churchill’s “Blood, Toil, Tears and Sweat” speech of May 1940, three days after the German army had started its offensive against France. The situation is very different now, and professional historians should refrain from creating false or pallid historical analogies. Yet I think the populace should be told again and again that this is a war on Europe (British media do that more than German or let alone Austrian media), and that active and long-term solidarity are needed now. That solidarity could start at the gas station, by saving energy wherever possible, by preparing for the fall and winter instead of pretending that our lives can pretty much go on like they did before February 24. At the very start of the war, the message should have been that the good times are over for us now as well.

Are we up to the challenge?

I very much hope that this active solidarity is being provided behind the scenes, something into which a historian writing about the present has little insight, that military help and defensive weapons that prevent Sloviansk and other Ukrainian cities from suffering the fate of Mariupol are arriving in Ukraine. If an ostensibly neutral country like Austria refrains from providing military support, it must compensate with more activities in other fields, such as supplying medical products to Ukraine. A historian’s quick glance at the map of Eastern Europe (and my experience of travelling to Ukraine by train and by road in the past 25 years) make it very clear how difficult it will be to provide Ukraine with the food, medical goods, energy, and weapons for a war that might drag on as long as the one in Bosnia. Are we up for the challenge? History will relate.